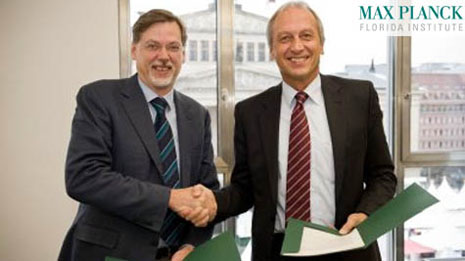 The Max Planck Florida Institute has recruited David Fitzpatrick from Duke University to be the CEO of its Jupiter campus. The scientist, who will also be the director of the nonprofit’s Department of Cortical Circuit Function, starts in early January.

Fitzpatrick is the founder and director of the Duke Institute for Brain Sciences, and a professor of neurobiology at its school of medicine. He has been a senior editor of the Journal of Neuroscience.
His wife, Martha McLean Bolton, a research assistant professor in the neurology division of Duke’s Department of Pediatrics, will join him at Max Planck as a research group leader. “Recruiting such a keen scientific mind with the credentials and the caliber of Dr. Fitzpatrick’s greatly advances the research mission of the Max Planck Florida Institute,” said Dr. Peter Gruss, president of Germany-based Max Planck Society, in a press release.

Florida and Palm Beach County started investing a combined $181 million into Max Planck in 2008 to support the biotechnology industry. Of that, $60 million is slated for a 100,000-square-foot research center that is expected to open in 2012. Max Planck scientists are working in a lab building at Florida Atlantic University’s Jupiter campus.

In addition to leading Max Planck Florida as it moves into its new building and recruits more scientists, Fitzpatrick will continue his research into how cortical circuits in the brain mediate visual perception.
“This is one of the most exciting steps in my career as a scientist,” Fitzpatrick said in a news release. “To work with a research organization of the reputation of the Max Planck Society is an opportunity of a lifetime, and this opportunity comes as a host of new techniques for revealing the structure and function of neural circuits are on the horizon.”

About the Max Planck Society:
Germany’s Max Planck Society has led the world in advancing the frontiers of scientific research for more than 60 years. The independent, nonprofit organization, with its international staff of around 20,400, including research fellows and visiting scientists, has an annual operating budget of $1.8 billion. Named for the 1918 Nobel Prize-winning physicist and founder of the quantum theory, Max Planck, the scientific institution maintains 80 institutes and research facilities located mainly in Germany, but also in Italy, Netherlands, and now in the United States. All are focused on exceptional, results-oriented basic research in the life sciences, social sciences and the humanities.

TV or Not TV—The Rise of Digital Video Advertising