Eight lessons from the life and work of Jack LaLanne 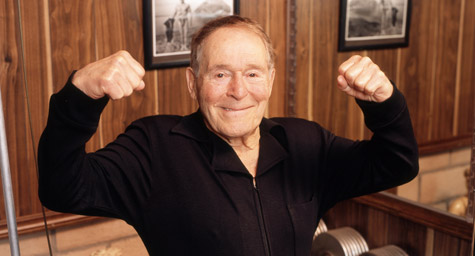 Seth Godin’s blog
1. He bootstrapped himself. A scrawny little kid at 15, he decided to change who he was and how he was perceived, and then he did. The deciding was as important as the doing.
2. He went to the edges. He didn’t merely open a small gym, a more pleasant version of a boxing gym, for instance. Instead, he created the entire idea of a health club, including the juice bar. He did this 70 years ago.
3. He started small. No venture money, no big media partners.
4. He understood the power of the media. If it weren’t for TV, we never would have heard of Jack. Jack used access to the media to earn trust and to teach. And most of what Jack had to offer he offered for free. He understood the value of attention.
5. He was willing to avoid prime time. Jack never had a variety show on CBS. He was able to change the culture from the fringes of TV.
6. He owned the rights. 3,000 shows worth.
7. He stuck with the brand. He didn’t worry about it getting stale or having to reinvent it into something fresh. Jack stood for something, which is rare, and he was smart enough to keep standing for it.
8. Jack lived the story. He followed his own regimen, even when no one was watching. In is words, “I can’t die, it would ruin my image.”
He died last week at 96. I don’t think he has to worry about ruining his image, though.

Evian Will Connect Your Fridge to the Internet with Smart Drop